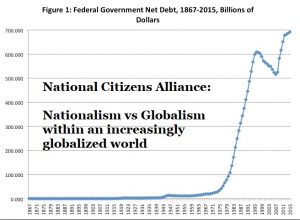 The federal debt is an indicator of this inefficiency and ineffectiveness. The debt continues to grow, surpassing $935 billion, with over $30 billion a year in debt service payouts of our tax dollars to commercial banks. The federal government spends around $280 billion a year on all forms of welfare handouts.

The National Citizens Alliance supports efficient and effective government and true service of the Canadian people, which includes fiscal responsibility with the people’s money. We support restructuring the welfare state, so that it works for all Canadians and most importantly those Canadians in true need. Our future as a country depends on it.

These are some of the measures that the National Citizens Alliance supports:

● assisting Canadians who are truly in need such as veterans who have fallen through the cracks, homeless, and seniors who are struggling to make ends meet

● working with the provinces to attain more efficiency and effectiveness in the universal healthcare system (federal government spent $37.9 billion in 2017, and up to an anticipated $42 billion by 2020, in federal transfers to the provinces for healthcare)

● reviewing the welfare safety net system for inefficiency and ineffectiveness; making sure those who qualify for welfare get the assistance, and provide them access to guaranteed employment

o First Nation’s Healthcare Service—dismantle to the top-down Aboriginal political structure in favour of a bottom-up political system; work with the First Nations to establish more productivity and independence

o Public Safety and Emergency Preparedness—eliminate this ministry and add it to the Ministry of Defense; build up the national guard and increase funding to all branches of the Armed Forces

The National Citizens Alliance believes that Canada requires a major restructure in order ensure the prosperity and security of future generations. The massive federal welfare state is not financially sustainable as demonstrated by the growing high federal and national debts. Although the transition to a more efficient and effective system of government premised on greater independence of the Canadian people will be difficult for some Canadians, the structural transition is integral to the future prosperity and security of the Canadian people and Canada.