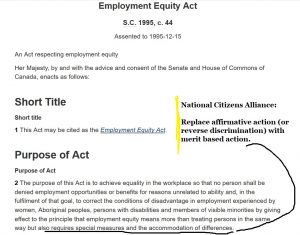 The National Citizens Alliance believes employment practices should be based upon equal opportunity. However, as a party we have issue with affirmative action, which we view as a form of discrimination.

The Amendment of the Employment Equity Act policy statement requires a vote of the NCA membership to be adopted. A minimum 70 percent voting membership must support the policy and with a 50 percent quorum of voting membership as per the NCA Constitution (2014).