The National Citizens Alliance (NCA) condemns Islamic radicalism and any other radicalism, and in particular the immoral treatment and harm inflicted on all civilians including women, children, and men. 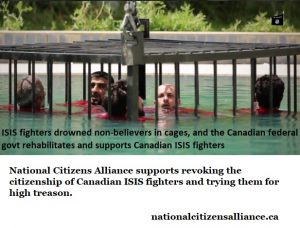 The federal government has taken a weak approach to dealing with Canadian ISIS fighters who chose to fight against our country and troops, and participate in a malignant ideology including monstrous acts.

The National Citizens Alliance supports trying them for high treason under Section 47 of the Criminal Code. In addition, we support capital punishment for individuals who act out the most egregious crimes including terrorism. However, the NCA will only reinstitute capital punishment if the majority of the Canadian people want it reinstituted.