As a democracy and member of several 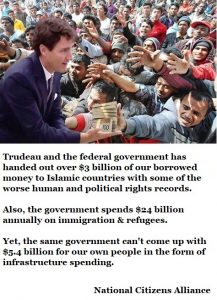 intergovernmental organizations, Canada has exercised its foreign policy with much discretion. The National Citizens Alliance (NCA) believes that as an international state and middle power, Canada must have a balanced and measured approach in its actions whilst maintaining its sovereignty.

The NCA believes that Canada’s foreign policy should reflect the sovereign will of Canadians and should serve four broad purposes of the Canadian state: national security including cultural security, prosperity, international recognition and prestige, and advancement of a just and fair world.

The NCA supports consulting Canadians wherever possible in the formulation and implementation of foreign policy. The NCA will oppose, in whole or in part, any foreign policy that Canadians do not democratically support as serving these four purposes.

These principles and values above, along with those articulated in the NCA Founding Document (2013), form the bases of the NCA foreign policy.

From the NCA Founding Document: Section 18.10 National Security and Protection of Sovereignty

The bases of NCA policies are the protection and enhancement of Canadian sovereignty, and the peace and security of Canadians from domestic and foreign threats. The NCA will only authorize surveillance of Canadians through Court Orders for search and seizure. The NCA believes that the trust of Canadians in their government and the freedom of Canadians are the country’s greatest security.

In the backdrop of international pressures related to economic interdependence and multilateral alliances that have called on Canada to take joint military actions, sovereignty remains an important value for Canadians.

The NCA believes in:

● Respecting the sovereignty and territorial integrity of other international states

● Reviewing all past signatory agreements to UN declarations, covenants, and conventions, and only supporting agreements that are in the best interests of the Canadian people

● Maintaining and developing close co-operative and friendly relations with all the countries that share Canada’s hemisphere: the entire American continent: north, central and south

● Defending Canada’s sovereign interests in the Arctic, along Canada’s borders and ocean boundaries

With an exporting economy, Canada must facilitate and pursue economic growth through trade. The NCA supports:

● Consulting Canadians on foreign trade and trade agreements in order to share information and attain public input, and the NCA will make public a record of public comments and suggestions

● Trading with democratic nations that demonstrate a value for the rule of law, as well as human and political rights

● Restricting trade agreements to countries that do not uphold the rule of law, as well as human and political rights

Canada has a tradition of deploying forces to meet our international commitments for peacekeeping and humanitarian relief and assistance. However, the United Nations has lost its way from the time of its creation in 1945. The NCA believes that the Canadian people must come first before any international organization. The NCA believes in honouring and respecting Canadian armed forces currently serving as well as veterans. The National Citizens Alliance supports the following:

● Consulting with Canadians on military deployment and peacekeeping in order to share information and attain public input; and the NCA will make public a record of public comments and suggestions

● Ceasing ALL voluntary funding of the United Nations

● Deploying Canadian armed forces to where armed conflicts may ensue, but after exhausting all diplomatic avenues and only when absolutely necessary

● Keeping Canadian armed forces away from armed conflicts that are primarily about nation building and self-serving economic development. The NCA believes that democracy must occur organically and inherently from the people of a country, and never imposed from the outside. Within this framework, the NCA will encourage people-based democracy in other countries primarily through example, but the NCA will never impose it. In terms of countries subjected to nation building such as Afghanistan and the Democratic Republic of Congo (DRC), the NCA will respect the will of the people of these countries, and if they want people-based democracy and our support, we will support them within our means

● Consulting Canadians on humanitarian relief and assistance in order to share information and attain public input; and the NCA will make public a record of public comments and suggestions

● Ensuring that the well-being of fellow Canadians in need like our veterans, seniors, unemployed come first before foreigners in need

Whilst acknowledging humanitarian crises and international treaty and alliance obligations, the NCA supports the following:

● Prohibiting Canadian charities, non-profit organizations, and corporations from subsidizing indirectly or directly the war effort of a country involved in a conflict, in order to lessen the killing of innocents from both sides of the conflict and encourage the end to the killing of innocents, and establish penalties including fines and loss of charity status for those individuals and organizations who violate

Advancement of a Just and Fair World

● Expressing and upholding Canadian values and strengths such as our human rights, rule of law, civil society, environmental stewardship, and bi-cultural/lingual governance

● Addressing unfairness and injustice in our own society, such as the injustice to Canada’s Aboriginal peoples and unfair and undemocratic aspects of federal governance including the electoral system, in order to provide a better example for the world

● Being politically incorrect and intolerant of radical, extreme religion, ideology, and/or way of life

The NCA will work with any party willing to defend Canadian sovereignty, respect the sovereignty of other international states, facilitate meaningful and effective dialogue with Canadians regarding foreign policy, and honour and respect our armed forces and veterans.