Modeled on the British Parliamentary system, the 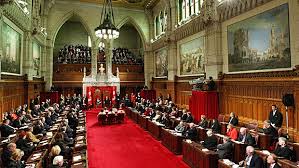 Senate is one of two Houses of the Canadian Parliament. It serves as a house of sober second thought to Parliament’s lower house, the House of Commons (House). Unlike the House of Commons, where elected Members of Parliament serve, appointed Members (Senators) serve in the upper chamber. The Constitution Act (the British North America Act) of 1867 governs the legislative limits of the Senate.

There are 105 appointed Senators, and the Constitution deems that they come from four divisions in Canada, as well as the remaining territories and Newfoundland and Labrador, from which specific number of Senators are representatives:

Yukon, Northwest Territories, and Nunavut – 3 Senators (each territory with one member)

The Governor General appoints Senators on the advice of the Prime Minister. Until 1965, appointments to the Senate were for life, but that year an amendment changed this provision to the age of 75 for a Senator.

Over the last several decades, the Senate has faced challenges over its role in today’s political system. Arguments prevail to make the Senate an elected body, where Senators serve fixed or unlimited terms similar to the House. Other arguments draw criticism to the number of Senators allocated to each region or province, pointing out that there is poor representation by population in the current arrangement.

The cost of maintaining the institution has become another criticism for some Canadians. Senators receive in excess of $130,000 per annum as a base salary. At a time when western governments encourage austerity, successive Canadian Governments have continued to pay to operate the Senate. Simply taking the base salaries into consideration with 105 Senators plus their expenses, the upper house costs taxpayers millions of dollars a year. In addition to the cost of meetings, Canadians have questioned the democratic legitimacy and utility of the Senate and its unelected representatives who have demonstrated poor judgment regarding expense claims recently and who tend to be partisan appointments for party loyalty by whichever party is ruling.

The Canadian people have choices regarding the future of their Senate, each with implications on the democratic processes. The National Citizens Alliance (NCA) believes that Canadians can choose to do one of the following:

reform the Senate with regards to electing versus appointing representatives, fixed or unlimited terms for Senators, and proportional versus equal representation

The National Citizens Alliance believes that the Senate should serve its purposes in Parliament, which includes acting as a check and balance on the House, introducing Bills or reviewing and amending Bills from the House in the legislative process, and performing committee work to study economic, legal and social issues in Canada. Yet, the NCA only supports this role if the senators are elected.

However, the NCA believes that the Canadian people via a binding national referendum ultimately should decide what to do with the Senate.

● referendum is legally binding to either maintain the status quo with the Senate, continue to pursue reforms to the Senate – with or without Constitutional amendments, or abolish the Senate altogether

● the Government mandates Elections Canada to educate the public regarding the purpose of the Senate in the Parliament, as well as the implications on parliamentary democracy when voting in a legally binding referendum to either maintain the status quo, reform the Senate, or to abolish the Senate

The National Citizens Alliance believes that referendum is a viable and necessary option because Canada’s elected officials have demonstrated over several decades that they are unable to resolve Senate issues, and the Canadian people should have the final say over significant issues that affect all Canadians.

In the event of a referendum decision to reform the Senate, through Article 44, “Amendment of the Parliament”, of the 1982 Constitution Act, the NCA believes in:

● Exploring possible reforms that do not require constitutional amendments

● Amending the Constitution in relation to the Senate where necessary

● Amending the Senate so that representatives are elected rather than appointed

● Amending the Senate so that elected Senators may introduce legislation related to any issue, instead of restricting them from specific legislation including those related to spending

● Encouraging the provinces and territories to continue holding elections to present Senators-in-waiting, while Canadians approve and finalize Senate reforms if abolition is not a choice as a method of expressing the provincial and territorial support for an elected Senate.

The NCA would respect the Canadian people’s decision, as expressed in a binding referendum, to abolish the Senate.

The National Citizens Alliance supports holding a legally binding referendum as soon as possible. The binding results would direct the Parliament conclusively over maintaining the status quo, pursuing Senate reforms – as afforded through Article 44 “Amendment by the Parliament” of the 1982 Canadian Constitution Act, or abolishing the Senate making a unicameral (single chamber) Canadian Parliament. The NCA will work with any party willing to carry out the democratic wishes of Canadians according to results of a binding national referendum.

In addition, there was a 100 percent quorum on the March 2nd vote. (The minimum quorum is 50 percent.)

Therefore, the NCA adopts the following amendment to its Senate Policy:

● Senators whether elected or unelected to the Canadian Senate will be subject to citizen-initiated recall.

● 15 percent of a relevant province’s electorate is required to initiate a recall vote.