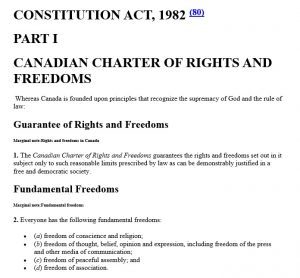 The NCA believes that these amendments and additions should only be decided by the Canadian people through a national referendum.

The National Citizens Alliance believes that the Canadian Charter (1982) should be updated to reflect advancement in surveillance technology and most importantly including online technology, and its potential to violate the freedom and privacy of the Canadian people.

Under Section 2, the National Citizens Alliance supports the addition of:

The National Citizens Alliance believes that equalization payments are detrimental to provinces and Canada as a whole, by adding to the welfare, entitlement federal governance through hand outs to less productive provinces and penalizing more productive provinces, and decreasing competition between provinces. Consequently, the NCA supports rescinding Subsection 36(2) in entirety from the Canadian Charter:

To be consistent with a free and democratic society, the National Citizens Alliance believes that the Canadian people should have a constitutional right to private property. The NCA supports the following amendment to Legal Rights:

“Everyone has the right to self-defense.”

In response to the Omar Khadr payout of $10.5-million, the National Citizens Alliance supports an amendment to section 7 to prevent this situation from occurring again:

“Any Canadian citizen or otherwise and regardless of age who engages in acts of war against our country and/or our allies forfeits all his or her freedoms and rights.”

“Acts of war” in this context refers to armed aggression/conflict.

Add a section to Democratic Rights, which states

“The House of Commons and any legislative assembly shall abide at all times by a clear, definitive separation of religion and state. “

Although the National Citizens Alliance supports freedom of religious belief and welcomes all faiths into the party, as a party we believe that there needs to be a constitutional mandate for the clear, definitive separation of religion and state in federal governance.

Amend Section 35 (2) to address non-inclusion and discrimination by adding “all”, “coast to coast”, and “without restriction and prejudice”:

Amend section 15 (2) to address the affirmative action, so that it reads:

(2) Subsection (1) precludes any law, program or activity that has as its object the amelioration of conditions of disadvantaged individuals or groups including those that are disadvantaged because of race, national or ethnic origin, colour, religion, sex, age or mental or physical disability. (84)