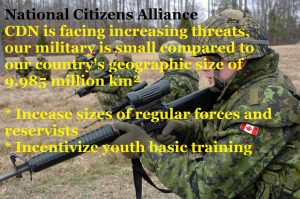 away from mandatory military service.

The National Citizens Alliance (NCA) as part of its “national advancement” agenda supports incentivized military service during both peacetime and wartime. The NCA believes that the Canadian people must come first, and we reject all forms of political correctness.

For our vast geographic size of 9.985 million km², Canada has a relatively small military. There are approximately of 65,000 regular forces and 25,000 reservists.

In an increasingly dangerous world including more volatile weather systems, Canada needs to be better prepared to deal with potential crises and threats to our national security. In addition, a larger and better equipped Canadian military will act as a deterrence to aggressive nations and/or organizations as demonstrated by the fact the Nazi regime did not invade Switzerland because the people of Switzerland had military training, or Japan did not invade the USA because the American people were armed, or Hamas has not invaded Israel because in part Israelis are trained in self-defense.

The National Citizens Alliance supports two programs for youth participation in the military:

The National Citizens Alliance believes that incentivized military service will provide the following benefits to our youth and country:

● Instill national values and citizenship in our youth

● Military training in the area of marital arts, firearms, and military history and strategy

● Learn a profession such as plumbing and basic mechanics

● Keep our youth potentially out of trouble

● Increase the size of the Canadian military to at least 200,000 total force, which would provide a strong boost to national security, create employment, and contribute to building up  the navy and air force as strong as they were in the 1960’s

The National Citizens Alliance believes that the national interest should override individual interest when it comes to national security.