All Canadians have a vested interest in natural resource extraction and production including oil and gas, 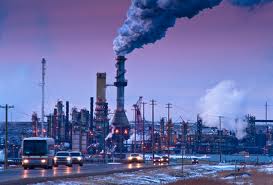 whether as a means for transportation, numerous oil related products, employment, and entrepreneurship.

Economically as an example, the Alberta Oil Sands contribute around 2 percent to the total Canadian Gross Domestic Product (GDP), and around 15 percent of the total GDP when factoring in related industries and technical services.

Related to the oil and gas industries, due to vast carbon sinks, Canada may be carbon neutral, and its contribution to global carbon emissions is 1.5 percent or less.

● Replace federal carbon taxation with federal government incentives for the private sector to improve the extraction, processing, and transportation of oil and gas

● Support government incentives such as a five year tax free business operation to encourage the private sector to set up oil, gas, and diesel refineries in Canada

● Ensure that all natural resource companies are accountable for the environmental and public health consequences from extracting, processing, and transporting these resources

The NCA supports a fair and comprehensive process to determine large-scale industrial projects. The current protocols under the Environmental Protection Act (1999) do not give Canadians reasonable say over such projects, and the process favours local and regional interests over national economic interests. The NCA believes that the Canadian people, coupled with objective evidence of financial and environmental impacts, should make decisions relating to proposed pipeline development projects. The NCA supports implementation of a weighted system that reflects fairly the various stakeholders and most importantly the Canadian public and national economic prosperity.

The NCA supports an energy independent Canada. The NCA will support any natural resource development that is in the best national economic interests of Canada.